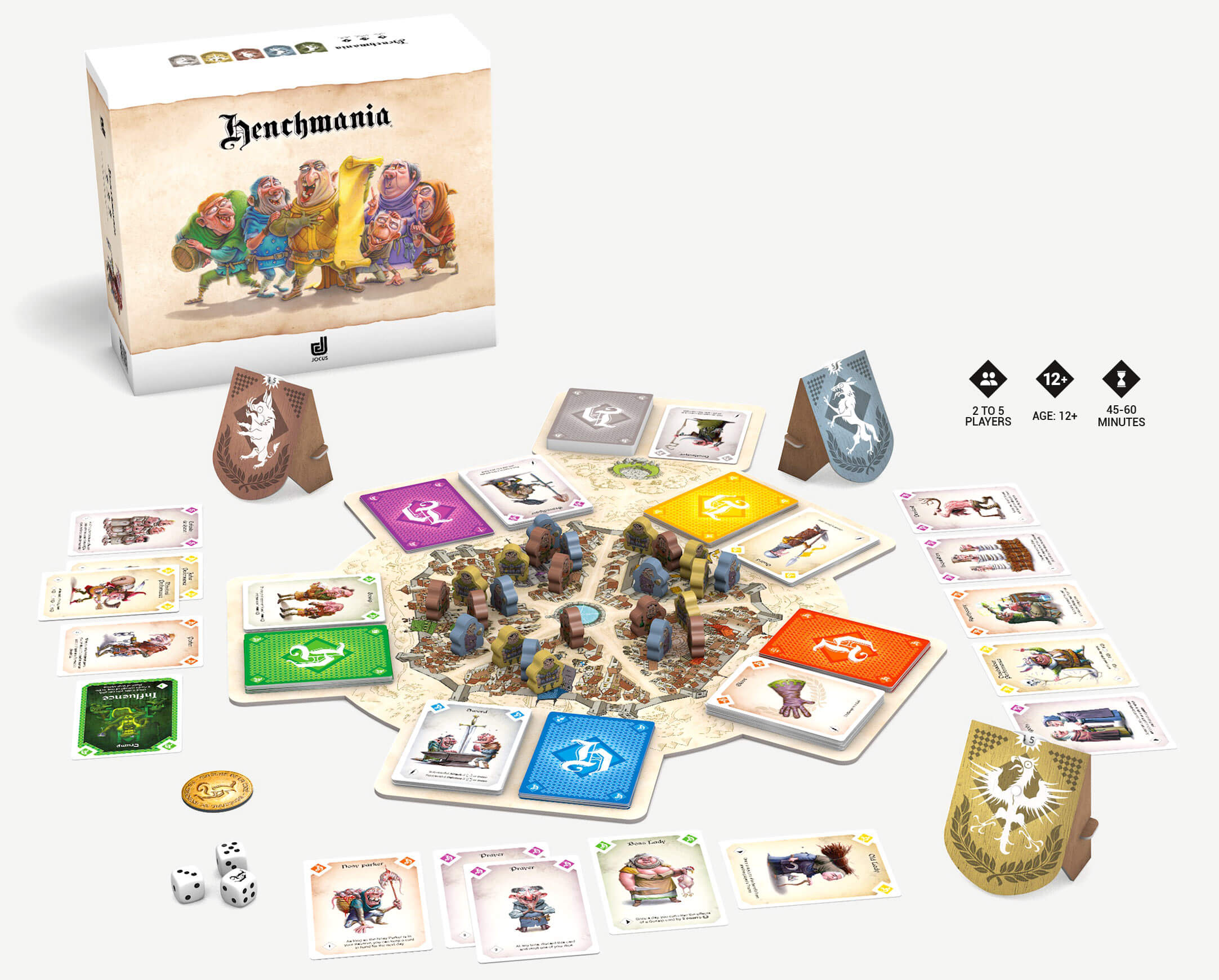 The world of Henchmania
The small medieval town of Montfleury, usually so quiet, is living in troubled times: the King has come especially to appoint his new Bailiff for the region. He will choose, among the great families, the lord he deems worthy of the coveted office.
During 4 days, the lords will compete with each other with audacity and cunning to impress the King. But they won't be able to succeed without the sacrifice of their little people, commonly called henchmen. The latter do not shine by their intelligence, but their devotion to their lord is unalterable, and legendary. 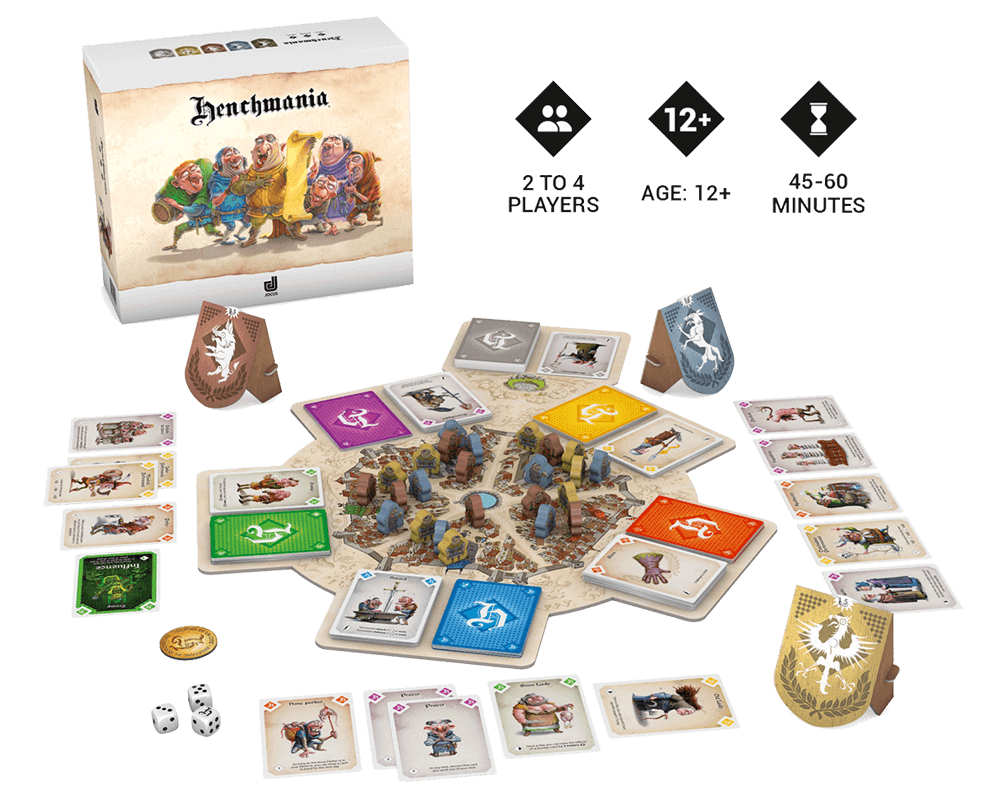 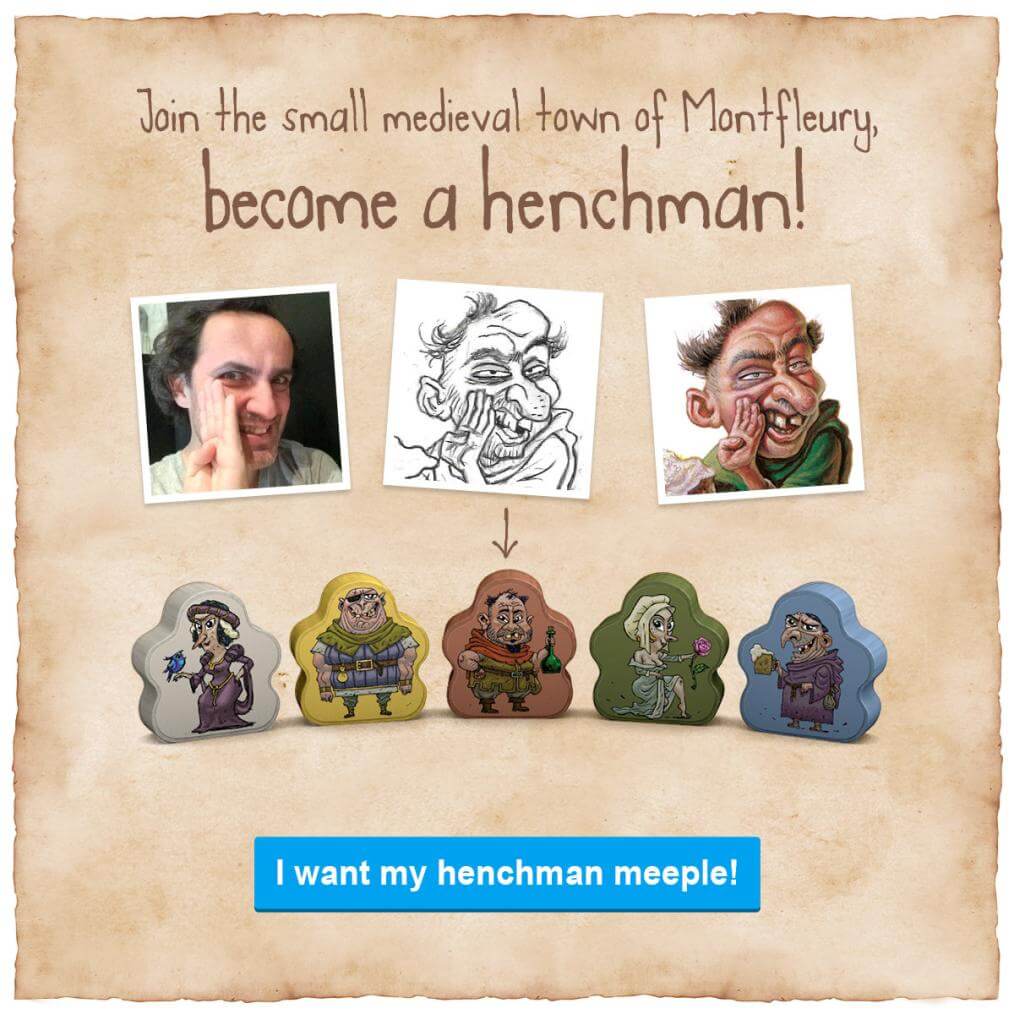 Take that!
In Henchmania, you will have to come up with some dirty tricks for your opponents. 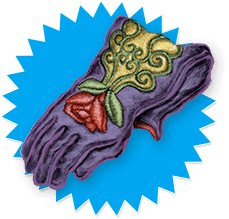 Various types of henchmen
Men, women, children, but also elders and even some farm animals... In Henchmania, you will find the medieval portraits of our ancestors. 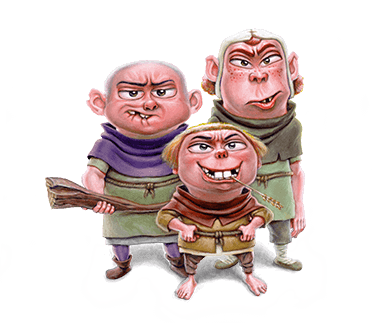 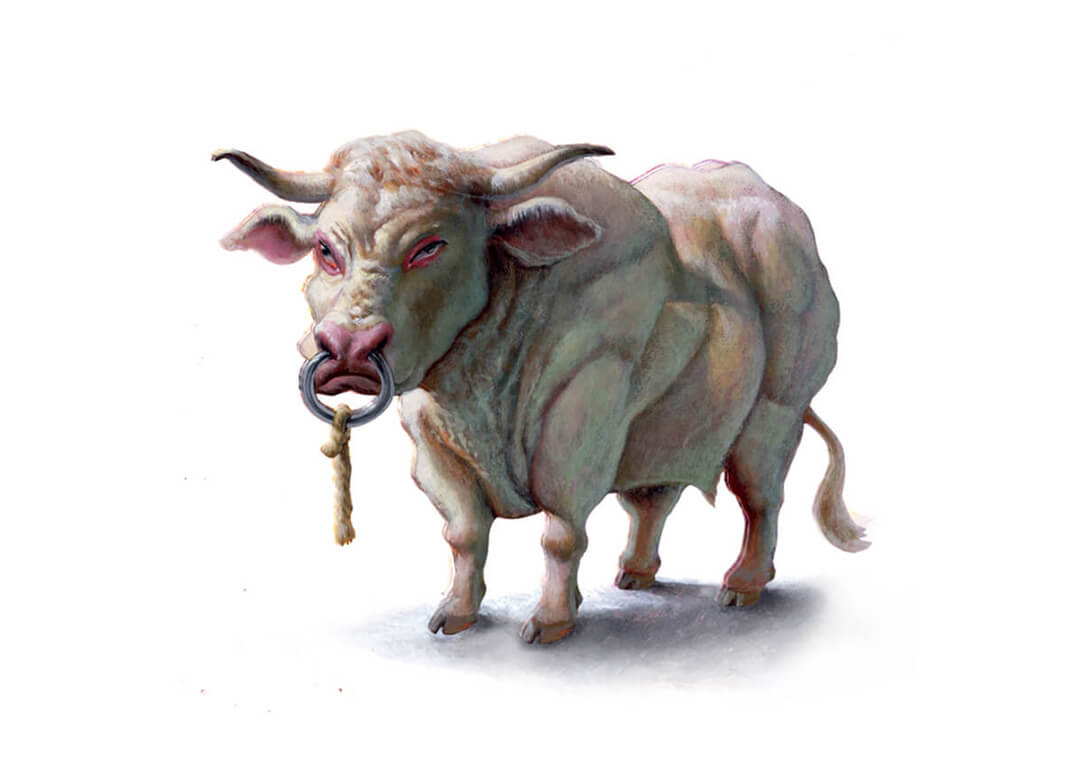 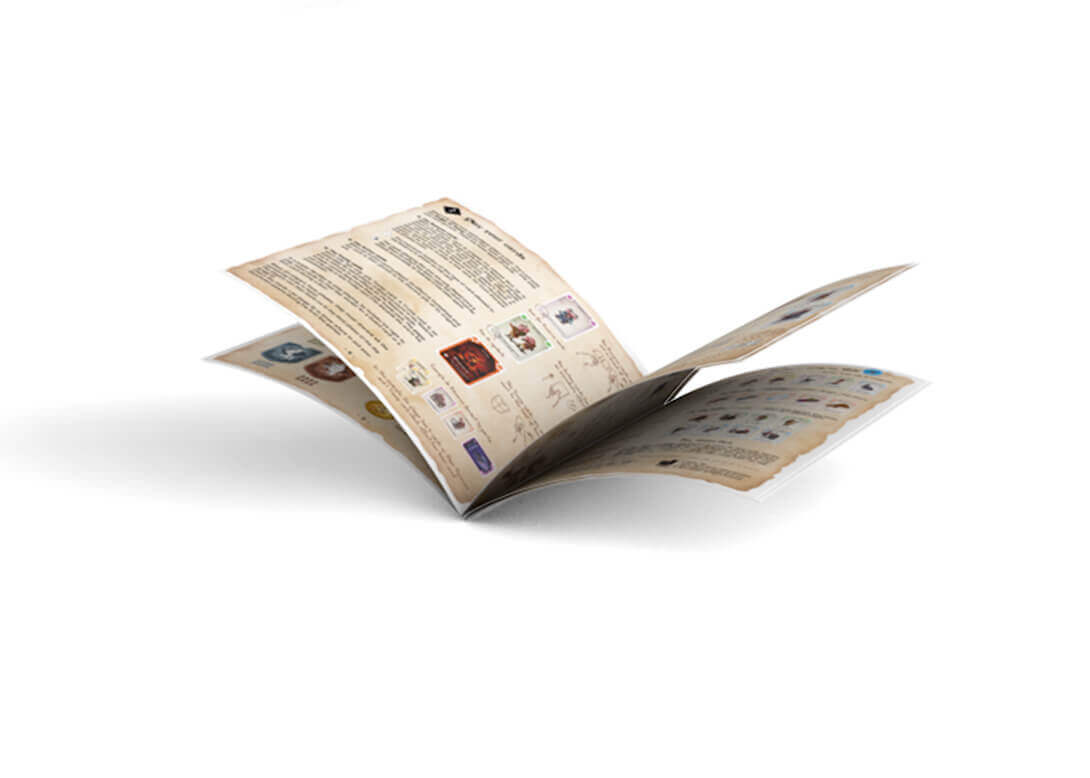 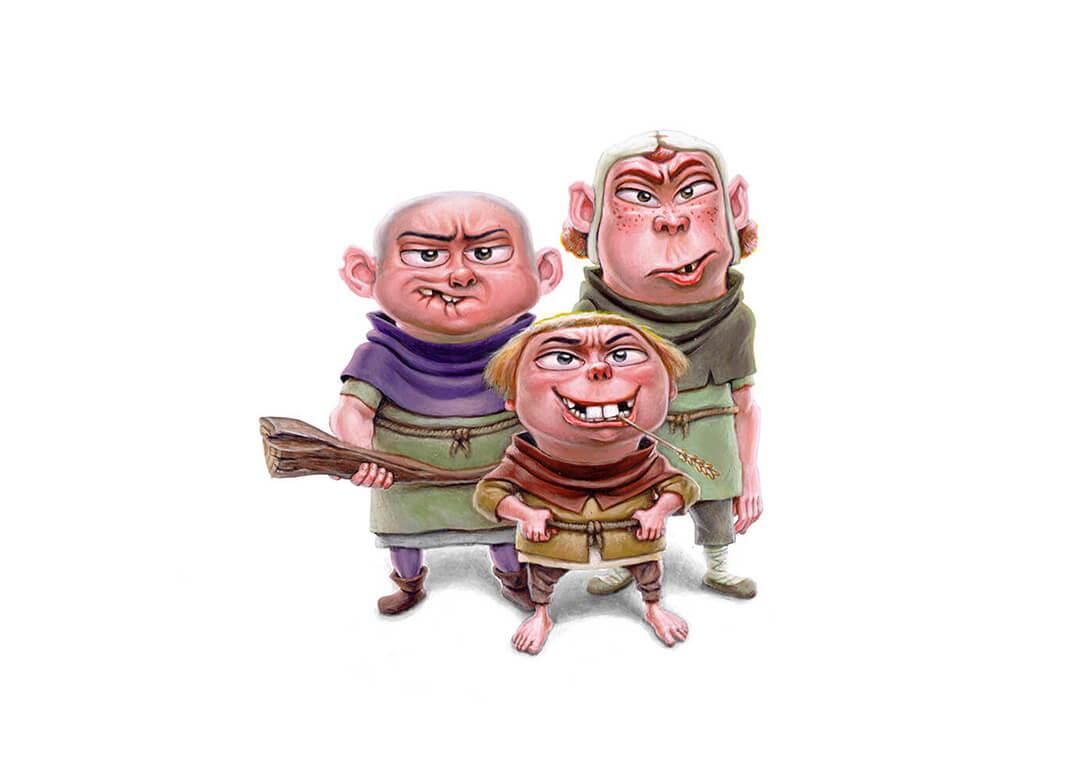 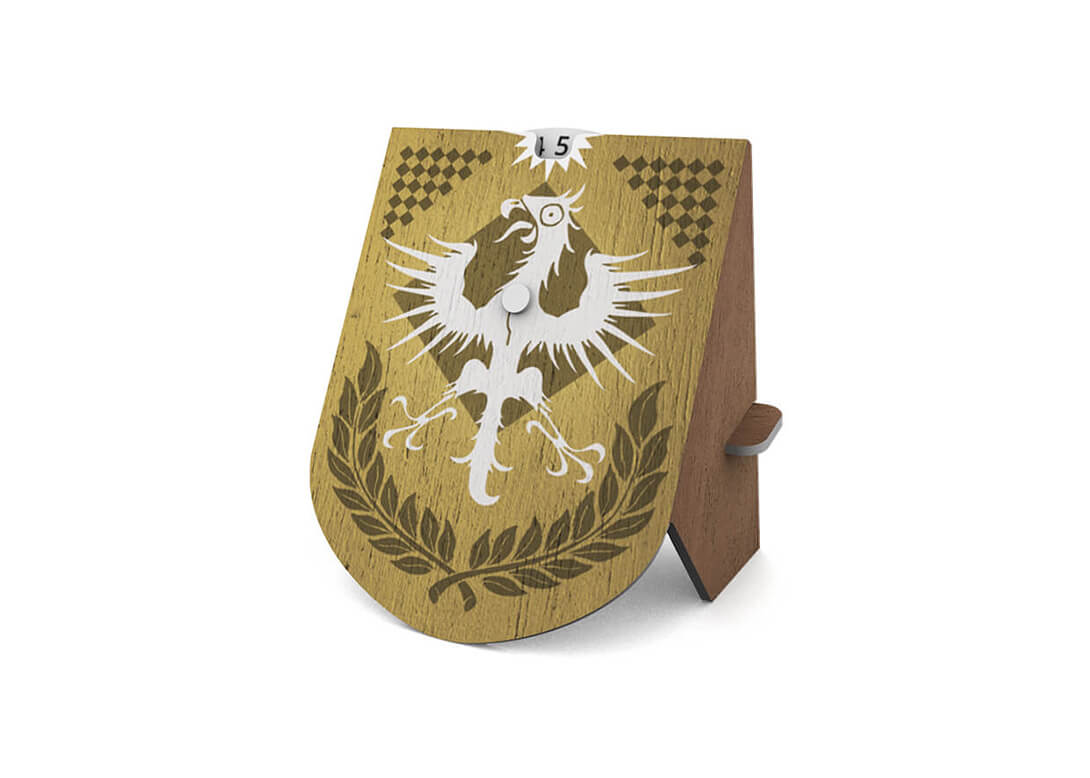 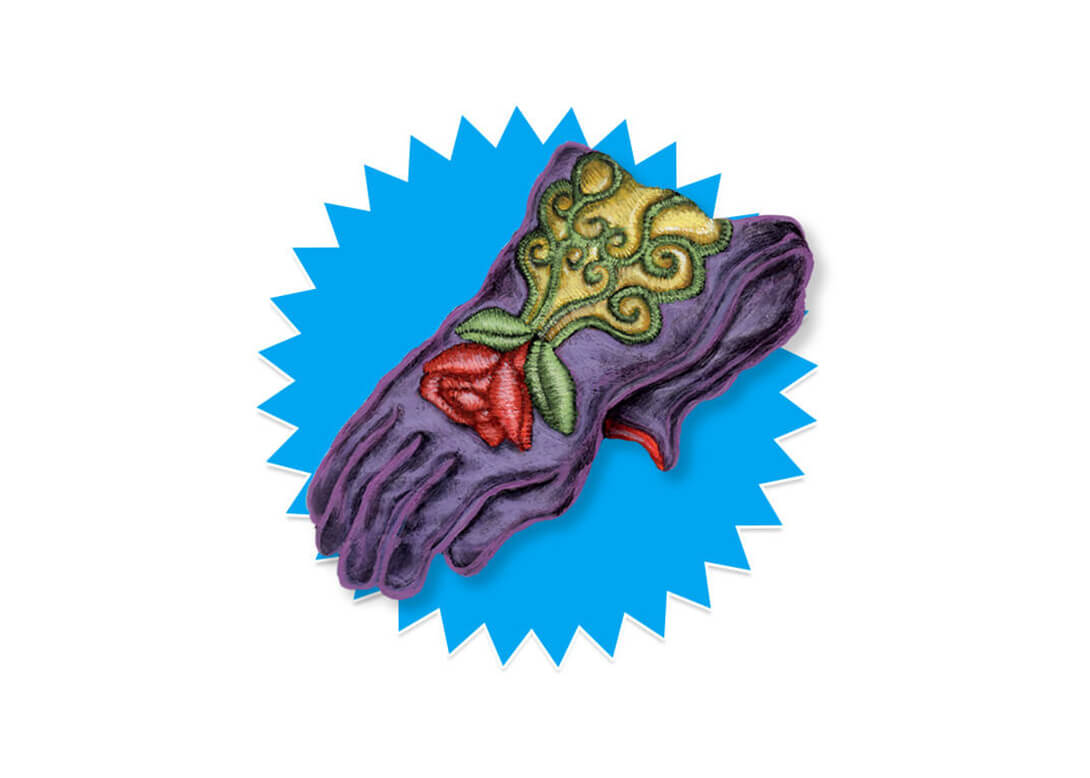 Family edition
Accessible from 12 years old, Henchmania allows up to 5 players to play as one of the of the Lords of Montfleury. 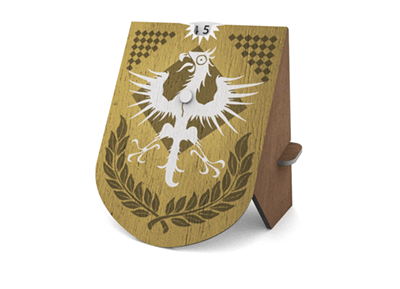 Easy to learn
Simple, intuitive rules written in a few pages. At the end of the first round, you'll have the game in hand! 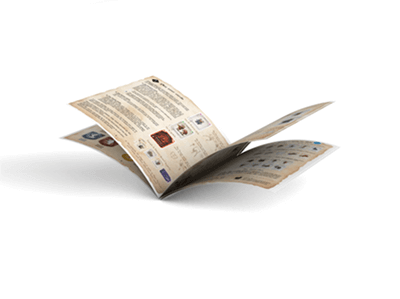 What's new in the campaign?
More than 6 years have passed since the first campaign…
You probably played Henchmania again and again. So did we. And all those games have not been vain,!You shared your gaming experiences, we have got ideas, sometimes even crazy ones, to develop the game and its atmosphere so… medieval!
Find out now what surprises we have in store for you with the new edition of Henchmania!
New henchmen: children of Montfleury
Each site in Montfleury now has two extra cards.
Take advantage of the children's new abilities, and don't be shy: they are also at your service. 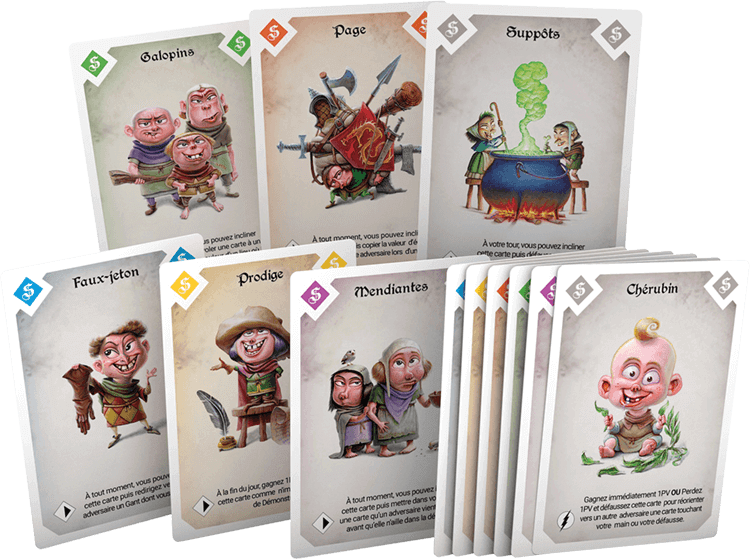 *Art not final
The special cards included!
Find the animals and special gloves for more fun! 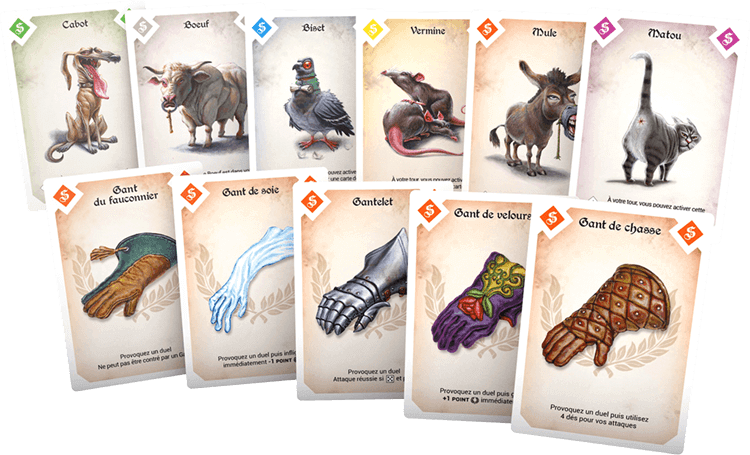 The 40 Henchmen wooden meeples, which are used in the placement phase, feature an all-new design, with many surprises.
A new design for the board!
With its ever-recognizable shape, the board will offer a new graphic design. The town of Montfleury has been redesigned by Laurent, to offer an even more immersive setting, in the style of an old map (with typically medieval perspective errors!). 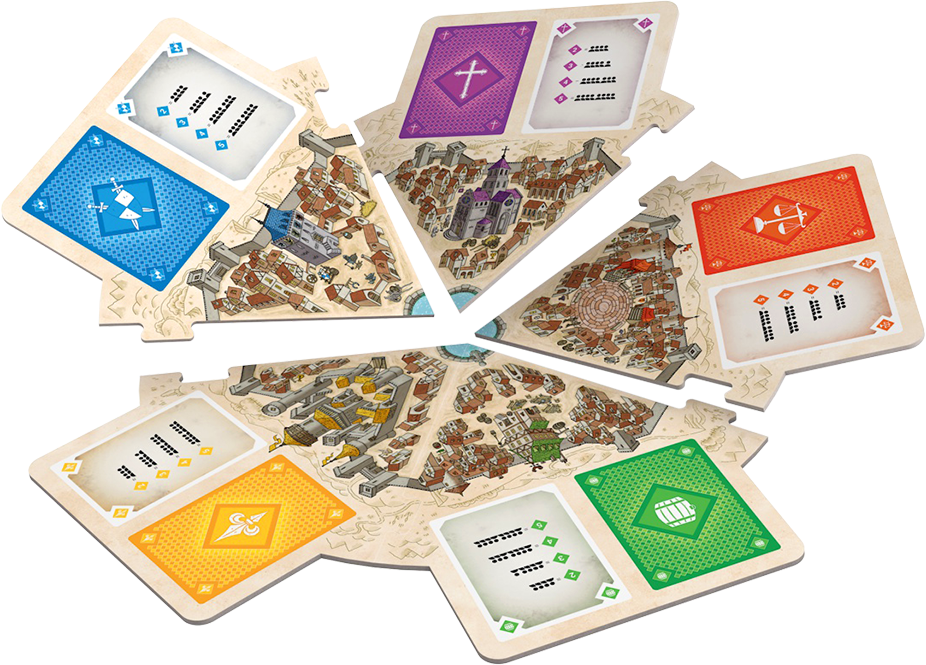 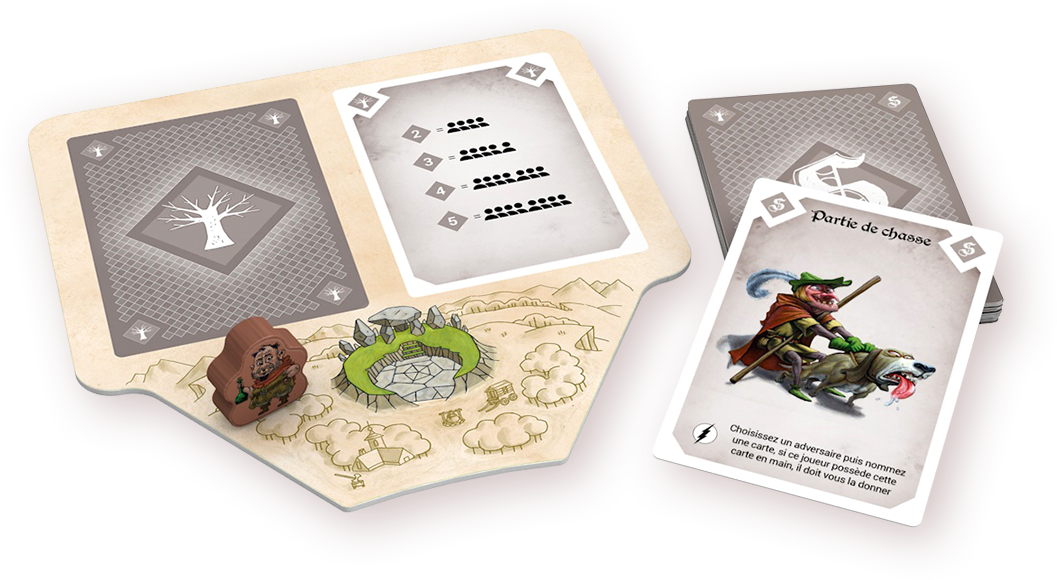 The Sanctuary
Send your henchmen outside the city to that ancient pagan place of worship called Sanctuary. Will you meet the Sauvageonne or the Bourrel? Most importantly, will you sacrifice your henchmen to recycle your unused cards?
A new extansion: the "Throne Room"!
The Throne Room is a new place that gives access to new powers. However, even more than in the other sites of the city, the places are very limited... 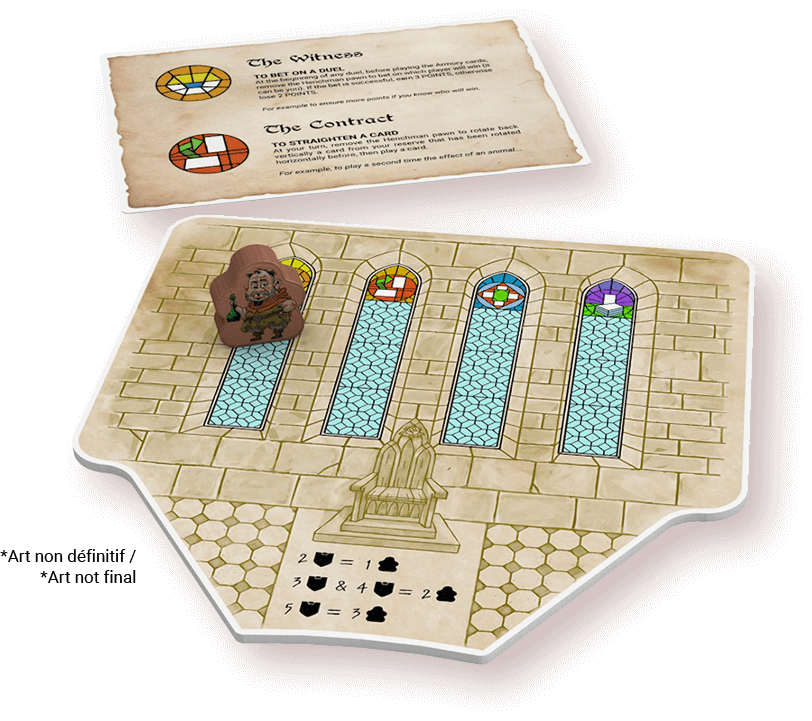 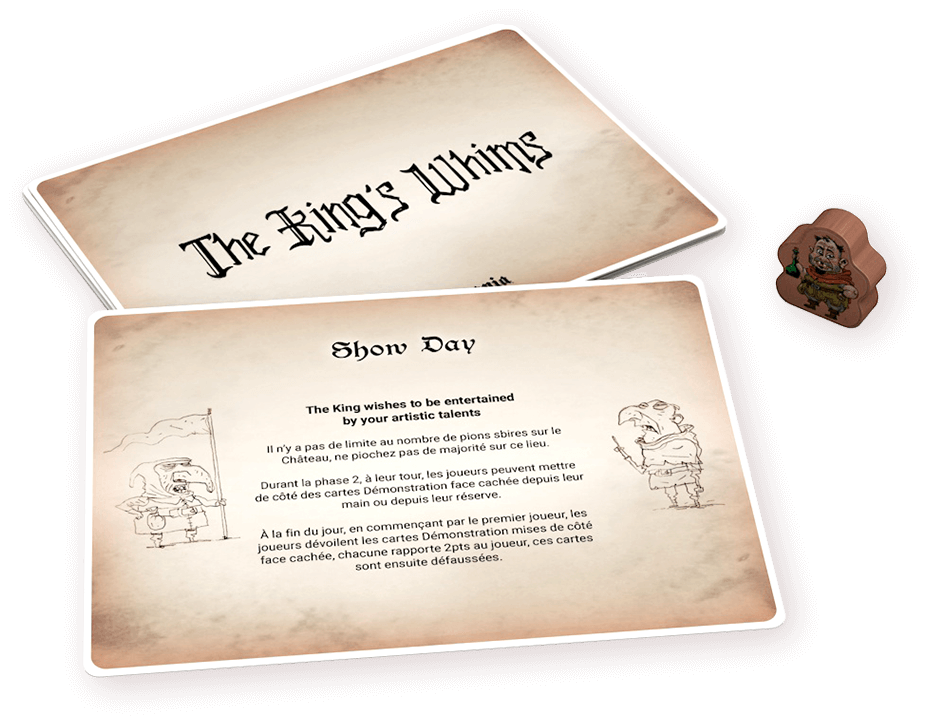 Another new expansion to spice up the game: The "King's Whims"
At the beginning of each day, randomly draw a special card that describes the King's Whims. This one explains what the King expects from his subjects for that turn, and temporarily changes the rules, creating mini objectives for the day to earn more prestige! 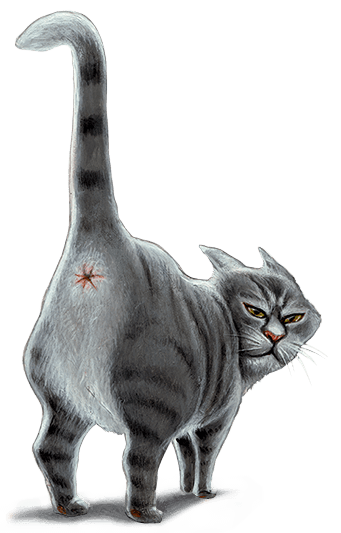 It will include:
- All the cards of the game: including the Sanctuary, the special cards and the new Children!
- The 2 new expansions
- And finally, the complete new rulebook

This offer will allow players who already own a box of Henchmania to integrate the new cards and expansions into their game.

That's the spirit of the Henchmen! 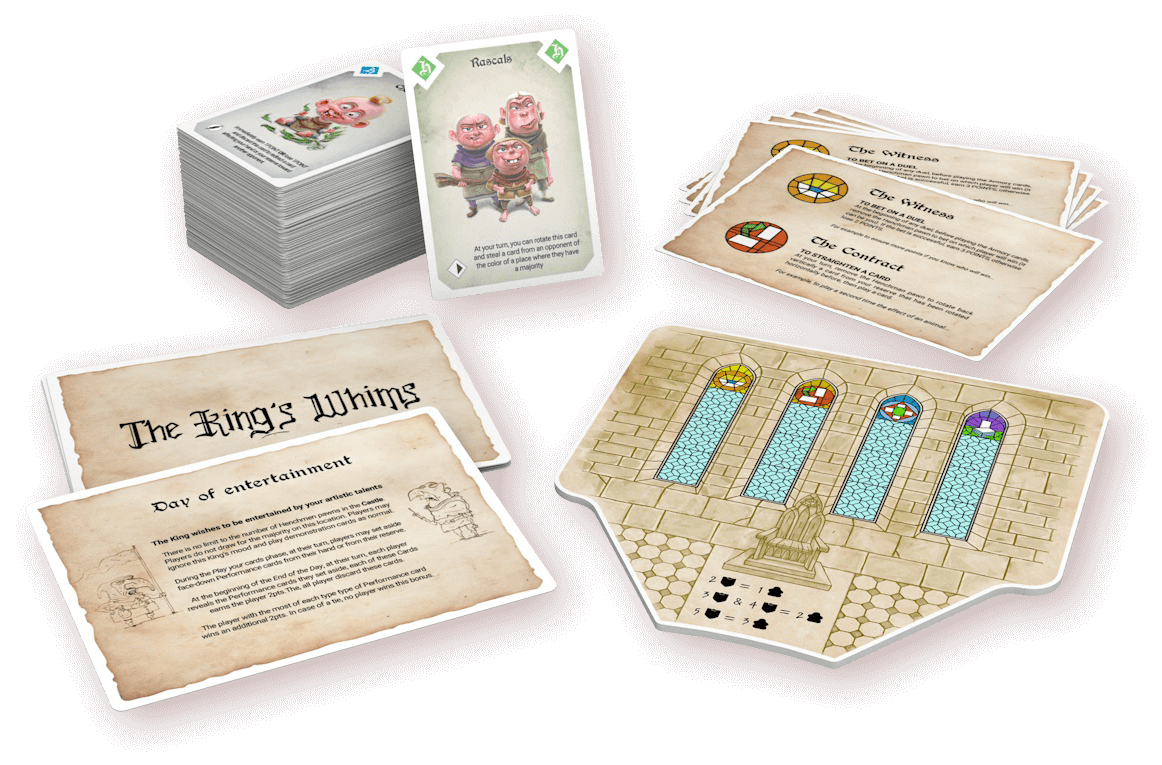 You talk about it best!
The players of The old edition

Cheryl Miller
I love Henchamnia!!!
Can’t wait to see what is coming!

A. E. (SuperBacker)
I have recieved the game. Brillant. Beautiful. And more than somewhat amusing. You have my thanks milords.

Mathias Klaar
Great news!!
Love the game and had so much fun with it
The playtesters of The new edition

Stephan Carsten
can't wait to get the new content and share it with my son who is a big fan of the game.

Maria Bauer
These new cards allowed us to end the game on Day 3 with one player reaching 30 points very quickly by combining the effects of his Henchmen cards and the King's Whims.

Martin Loch
I find that the new cards bring a lot of diversity to the game, it makes the choice of strategy more complex.
Gameplay
Learn how to conquer the title of Bailiff in only a few minutes!
1. Place your Henchmen
Build up your playing hand with your henchmen 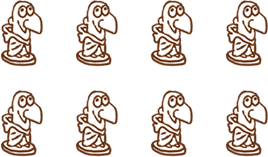 You start out with 8 Henchmen

Each time you place a pawn,
you pick card 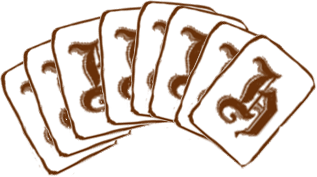 Ending phase 1 with 8 cards in hand
2. Play your cards
You can play 1 card per turn, there are 2 types of cards 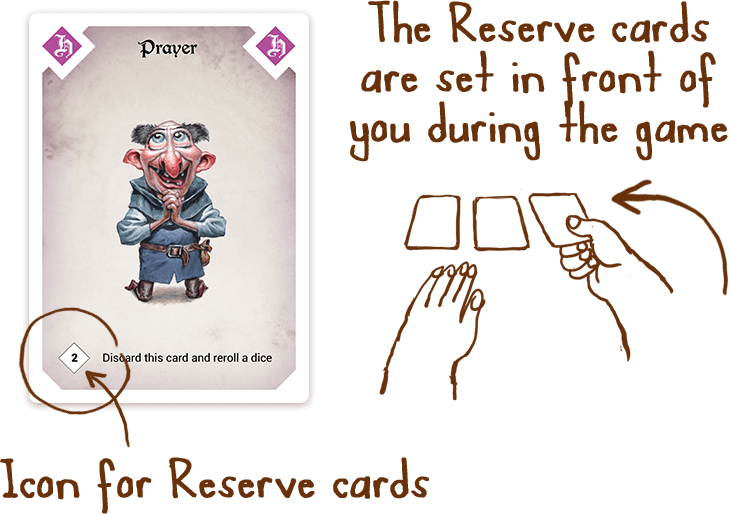 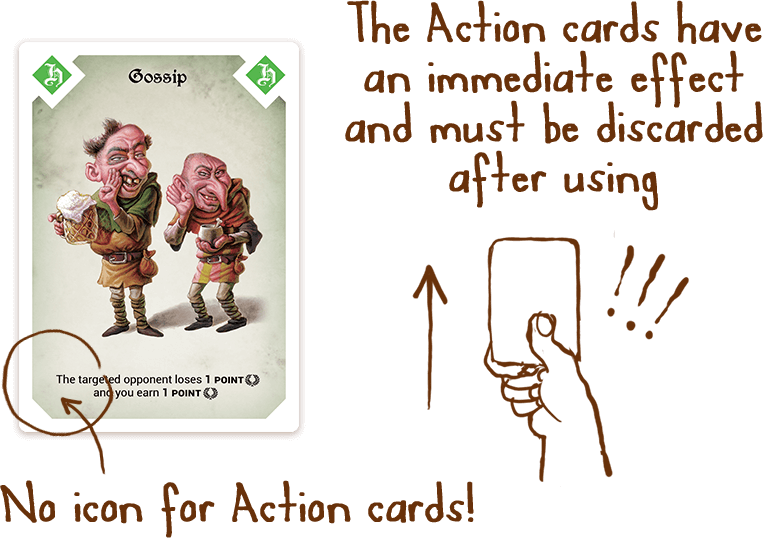 3. Add the numbers
You can add the prestige points to your family coat of arms. 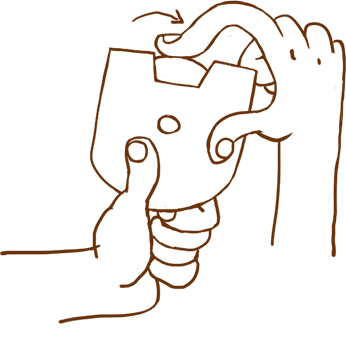 Add up your Reserve cards score 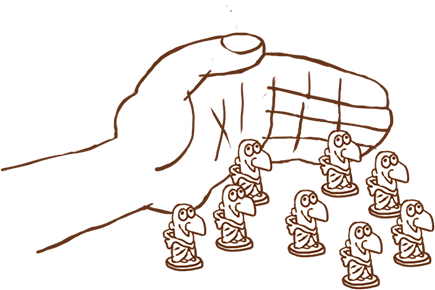 Call back your Henchmen 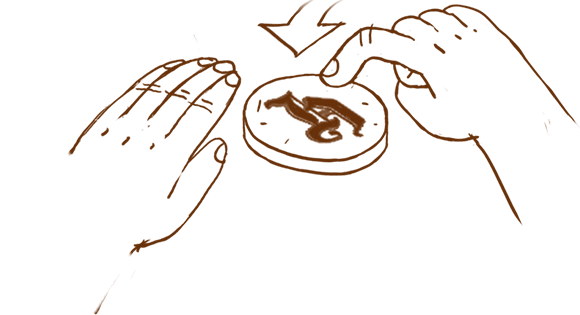 Move the First Player pawn
to the next player 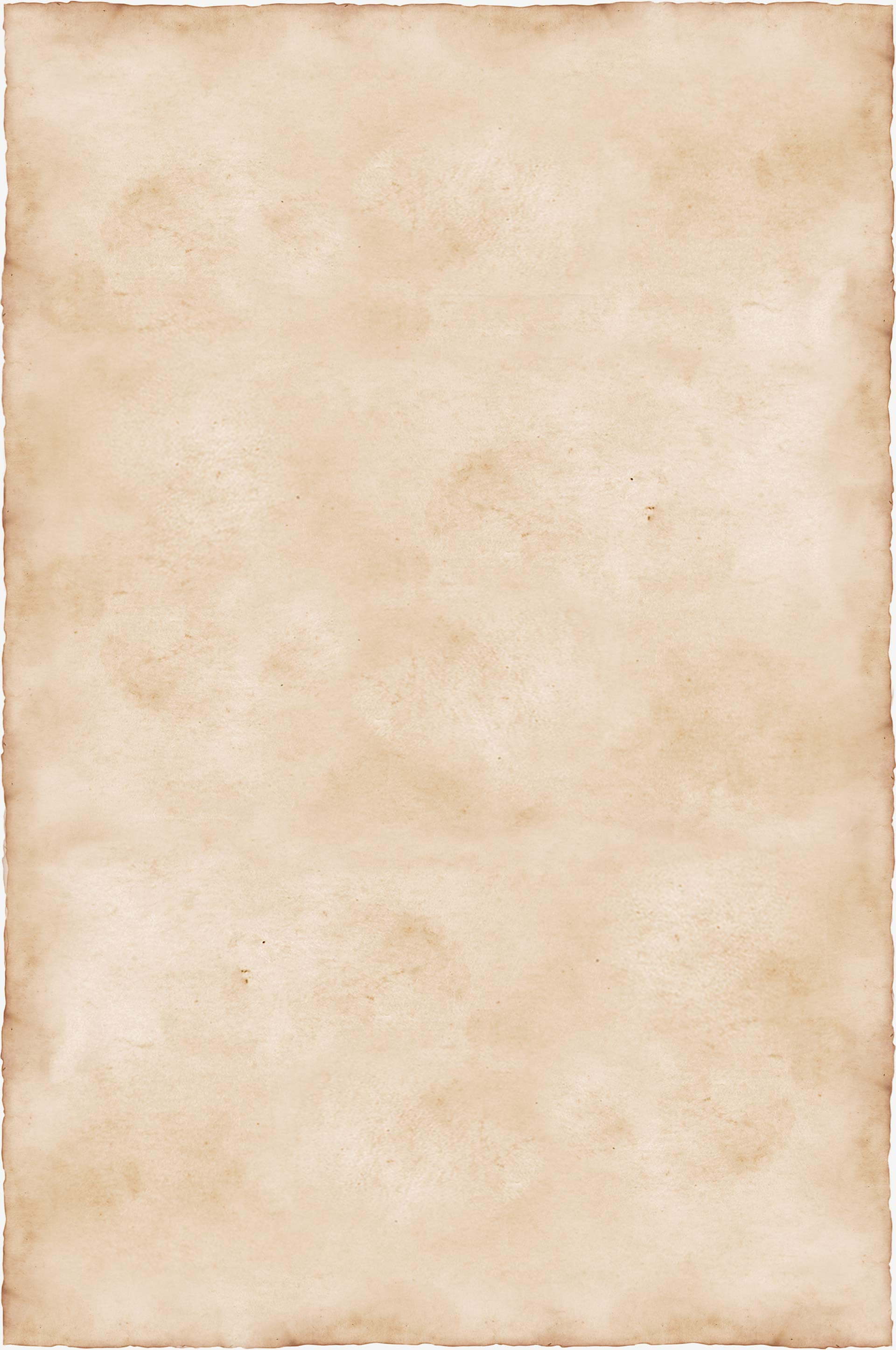 Campaign FAQ
We will make our best to answer all your questions about the game, the campaign, the components, the artwork... We will gather all your questions et update regularly our answers.
Q: Who is the Henchmen team? The Jocus Publisher?
A: Jocus is a publisher from Bordeaux, founded in 2015. As creators and enthusiasts, we develop original games, which will delight beginners as well as the most seasoned gamers, thanks to our design method centered on players' expectations. We create a game step by step, each one followed by many test games. Our games reflect the values we hold dear: quality, aesthetics and, above all, FUN!

Q: On which platform will the campaign for the Second Edition of Henchmania take place?
A: We want to give all our lords and ladies the chance to get this new edition of Henchmania, so we opted for an international platform: Kickstarter.

Q: I don't want to miss any information. How can I do that?
A : Very good question my lord! Nothing could be simpler:
Subscribe to our newsletter Here
And follow us on our social media.

Q: What does this Second Edition bring to the table compared to the first one?
A: This Second Edition of Henchmania brings a lot of new features: the return of the first expansion, The Sanctuary, which will be included directly in the box, new gameplay features (we'll tell you more soon!), two new expansions, design improvements, and many other surprises that we can't wait to share with you!

Q: Will the First Edition of Henchmania become obsolete?
A: No, that's not the goal or purpose of your henchmen. We want to offer a Second Edition to allow new lords to travel to Montfleury, but also give our first lords the opportunity to enjoy all these new features.

Q: What do you have planned for the lords of the First Edition?
A: Your henchmen have yet to define the final form this will take, but one thing is for sure: we're not forgetting about our First Edition Lords, who will have access to all the new gameplay elements!

Q: Will there be a retail pledge during this campaign?
A: Yes! We are very attentive to the expectations of our retail stores, which remain the best influencers of our games.

Q: What will be the price of the base pledge for this Second Edition of Henchmen?
R : 55€ (approx. $56,31)
Q: What's new in the gameplay of this Second Edition of Henchmania?
A: We'll start revealing new gameplay in September. This gives your henchmen some time to finalize all the little details and give you some surprises before the same campaign ;)

Q: I don't know the game Henchmania yet, what are the game mechanics and what is the goal of the
game? A : Henchmania is an accessible, family game with a medieval spirit, it's a board game that mixes Game of Thrones and Monty Python and the Holy Grail:

Welcome to Montfleury, a small medieval city, which lives in turbulent times: the King must soon appoint his new Bailiff to administer the region.
During 4 days, the lords pretenders (you!) are going to confront each other, competing of audacity and cunning to reach the coveted office.
Your objective is simple: to get a maximum of prestige points to score on your family Coat of arms. To do this, your henchmen will be your most precious allies: they will allow you to entertain the court and to confront the other lords in duels, but also to make your life easier... or to complicate that of your opponents!

Q: How does a player's turn work?
A: Each day (game turn) is divided into 3 phases:

Playing the cards: each player takes a turn playing one card at a time.
There are 3 types of cards: Action (to be played immediately), Reserve (remains in reserve throughout the game unless its text states that it must be discarded to apply the effect), and Trump (a single card in each location that gives the player an advantage).
It is during this phase that you can challenge other players to a duel to win and make your opponents lose prestige points.
When all players have passed their turn, the cards are discarded and the third phase of the day arrives.

End of the day: each player adds his prestige points to his family Coat of arms. If a player exceeds 30 points or if it is the fourth day, the End of the Game is triggered.

You can read Henchmania rulebook HERE.

Q: You mentioned two new expansions, what can we expect?
A: New cards, certainly a new location, we can't tell you more right now but very soon ;)
Q: Who are the Henchmen artists?
A: There are two artists:

Laurent Nicolas on character design, winner of an Emmy Award in 2021 for his characters in the Netflix series Love, Death + Robots (season 2, episode 1 - "Automated Customer Service" / "The Robot and the Old Lady") and creator of the serie Lascars.

On the painting and coloring side, it's Landroïd, whose real name is Landry Munoz. A multidisciplinary artist who mixes craftsmanship with technology, Landroïd creates on urban supports as well as in painting or in modeling and sculpture by hand.

Q: What board will be present for this Second Edition?
A: The game board for this Second Edition of Henchmania will be a village-shaped board with a new graphic design. The town of Montfleury has been redesigned to provide an even more immersive, old map-like setting (and its typical medieval perspective errors!).

Q: Do you have any improvements planned for the game board?
A: With its ever-recognizable shape, the board is undergoing an evolution of its graphic design. The city of Montfleury has been redesigned by Laurent, to offer an even more immersive setting, in the style of an old map (and its typically medieval perspective errors!). The set still retains the artist's touch to continue to be part of the universe of Henchmania.
The game is also equipped with a new day counter, which comes to settle between 2 places of Montfleury like a place extansion.

Q: How big is the box?
R : More information to come!